This weekend, Doc and I went up to Sacramento for the Broken Strings Music Festival, and we decided to also camp at Folsom Lake SRA. Unsurprisingly the lake is really low right now. Like, really low.

The sun-baked martian wasteland left behind in the lake bed was fun to explore, but perhaps not as fun as tubing around on a nice big lake.

We still got to swim around in the American River, though. But let me tell you this: I am suspicious of fresh water. Like, ultra paranoid. Having grown up in and around oceans, I feel like swimming in fresh water can only ever lead to weird brain-eating amoebae or flesh-eating bacteria or blood sucking leeches or even blood-sucking fishes. This is what swimming in lakes and rivers means to me.

I still swam around in the American River for an hour or two, though, and had a lot of fun. I wouldn’t shut up about leeches, though.

I also ended up taking the Leaf on a mighty journey: 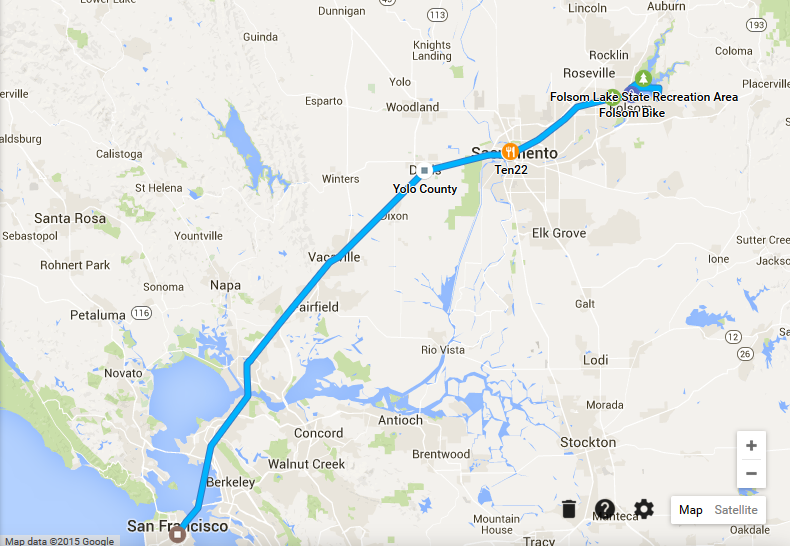 On the way there we only had to fast-charge once, in Vacaville, because I charged the Leaf to 100% at home the night before and I also had access to level 2 charging in Sacramento while we dorked around there. Although I should mention that ~80% of the level 2 charging stations in Sac-town are in garages which are CLOSED on the weekend. Which is… frustrating. Pretty much everything in that town closes for the weekend, because a lot of the government workers prefer to live in the Bay Area and they take the train to Sacramento every day and it turns into a ghost town whenever they don’t commute in. A weird side effect of being the state’s capitol, I guess.

On the way home, however, I was unable to get the charge up to 100% at any point, so we had to charge twice: once in Davis and once in Vallejo. Oh, well. I had originally planned on using the level 2 charging to get it up to 100% for the ride home too, but alas we were running around so much doing other things that this didn’t really happen. Still it wasn’t too bad.