So I’ve been doing some more investigating of my Google Timeline Data here and there (as I started writing about here).

After my last post, a friend of mine pointed me towards the Haversine formula for calculating distance between two sets of lat, long coordinates and with that I was able to calculate distances on a day-by-day basis that were consistently close to Google’s estimations for the days. Encouraged, I then moved on to calculating distances on a per-year basis, and that was fun. I got what seemed reasonable to me:

Recall that these are for every sort of movement, including airplanes. So you can see my average miles/day went way up recently, due to a few big recent airplane trips. So if the numbers seem high (~60 miles a day, ~45 miles a day), this is why.

But then I wanted to visualize some of the data. I decided to use matplotlib to plot the points because it is easy to use and because Python has an easy way to load JSON data.

So I ended up breaking down the points by the assigned “activity.” True to my word, I only considered the “highest likelihood activities,” and discarded all the other less likely ones. To keep it simple.

Of those 288,922 data points with activity, it turns out that there were only a total of 7 different activities:

Note that, at the time, I wrote a script which saved all the different activity types into their own CSV, because I wanted to look at them and play with them individually. And I then decided to load these CSV files into my script for plotting – because they were there. Note that, if I went back and did it again, I’d probably not bother with the CSV intermediary, and just go straight from the geoJSON file.

And in this way I was able to see the different activities plotted onto Basemap’s default map thing: 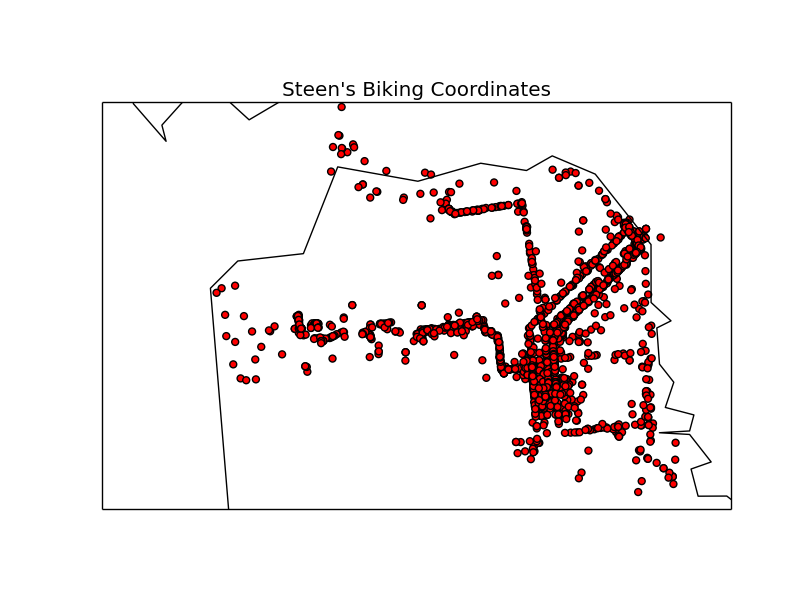 Points in San Francisco from my Timeline Data that Google tagged as “onBicycle.” I can see a lot of my favorite biking routes, as well as that time I biked the Golden Gate Bridge. 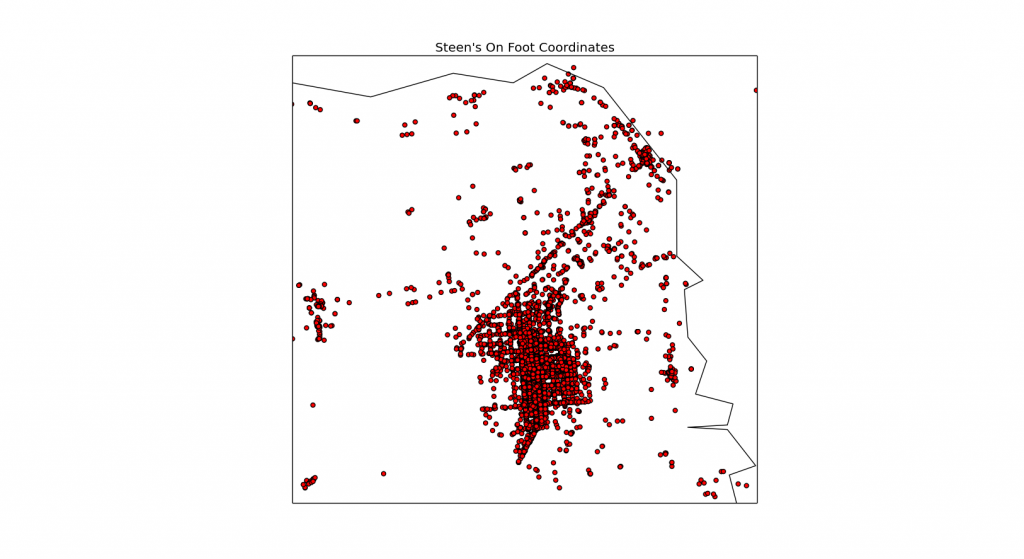 Points in San Francisco from my Timeline Data that Google tagged as “onFoot.” Streets are less clear, and it sort of looks like a big blob centered around the Mission. Which seems accurate, given that I just sort of meander about. The one straight looks like Market, which I occasionally will walk all the way on, so that makes sense. 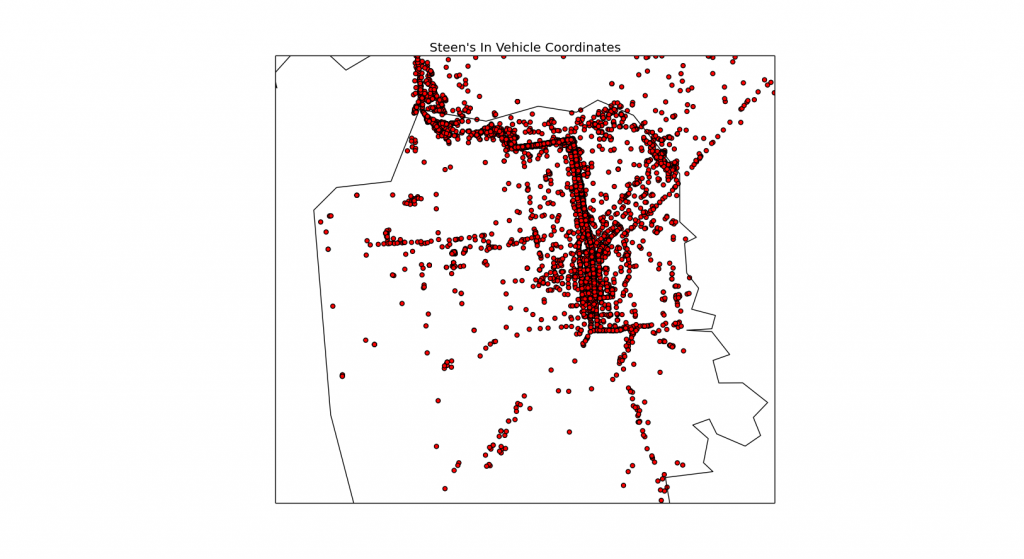 Points in San Francisco from my Timeline Data that Google tagged as “inVehicle.” All the points in the bay are most likely due to when I take the ferry to work – as a ferry is, in fact, a vehicle. And I am not surprised to see that the vast majority of the points appear to be on Van Ness.

I also plotted the other categories – including the mysterious “tilting,” but I couldn’t really discern any sort of meaning from those. They just looked like all the points from everywhere I’ve ever been, and were therefore not very meaningful. Not like the dramatic differences between the points and obvious routes for biking, on any sort of vehicle, or walking. So, there’s no need for you to see those.

I’d say this was a success. So my next question is to figure out how much time I spend doing each activity. And how much time I spend in each place. I’ll have to think about it a bit on how to calculate the time. All those points with no activity associated with them have me concerned that it won’t be very straightforward to just subtract the timestamps to get ΔT. It could be the case that in the “no activity” points, I had ended up doing completely different things, and then returned to the original activity (in which case the calculated ΔT would be incorrect). But, then again, it is probably very likely that all those “no activity” points actually are the same activity if they are bookended by it. Hmm.

So now I’m wondering if, given that a time point is uploaded every 60 seconds, I should just say 1 timepoint = 60 seconds? That doesn’t seem quite right to me, but I’ll work it out for a smaller data set and see if that even comes close to accurate. I’ll keep thinking about it, but if anybody has any suggestions on how to get around this problem, feel free to let me know!

Steen is a nerdy biologist who spends a lot of time trying to cultivate Chloroflexi. When she isn't working, she likes to draw comics, play video games, and climb.
View all posts by Steen →
This entry was posted in JSON, Programming, Python. Bookmark the permalink.