How to Make Your Own Rune Staff Calendar

I’d recently been studying Rune Staves and how they were used as perpetual calendars on the 19-year Metonic Cycle, and I got to wanting to make my own.

The idea is pretty simple: three rows convey all the information you need.

The middle row depicts all the days in a year by repeating the first 7 runes of the Younger Futhark ~52 times. So kind of like F U ᚦ A R K H F U ᚦ A R K H etc (in Younger Futhark, th is a single character represented as ᚦ). Or, if we did it using the Latin alphabet, it would be A B C D E F G repeated ~52 times. Keep in mind that this is just a convenient way to split the year into chunks of 7, it does not represent days of the week! Because, for example, Monday will not always fall on the same day every year.

The top row has illustrations that indicate which of the days are “feast days” or “good days” or “evil days” or whatever else special days they’d want to indicate.

The bottom row has all the letters of the Younger Futhark (plus 3 “bonus runes” made for this purpose) to represent the golden numbers 1 – 19. So, depending on where you are in the 19-year cycle, you look and see wherever that year number appears in the “golden numbers” row, that is when there will be a full moon. According to the Metonic Cycle, the moons fall the same day every 19 years.

To summarize the three rows:

Also keep in mind that not every day has a golden number assigned to it! I guess not every day was cut out to have a full moon fall on it.

I wanted to get the full pattern so I could make my own, but all the photos of rune staves were segments, and they did not show one complete cycle of the 19 golden numbers, so I could not recreate the whole pattern! Until I found the piece MS 2913. This is a calendar drawn in Norway in 1636 which is apparently a sort of rune staff inspired / parchment calendar hybrid. They use the Latin letters ABCDEFG instead of the runes FUᚦARKH, and use a different numbering system for the golden numbers (not runes), and they also include the days of the month (which traditional rune staffs did not have), but the whole idea is represented there with the three rows serving the same purpose.

To save you the trouble, I have “translated” MS 2913 into something that I find more easily readable, so that I can begin to make my own rune staff: 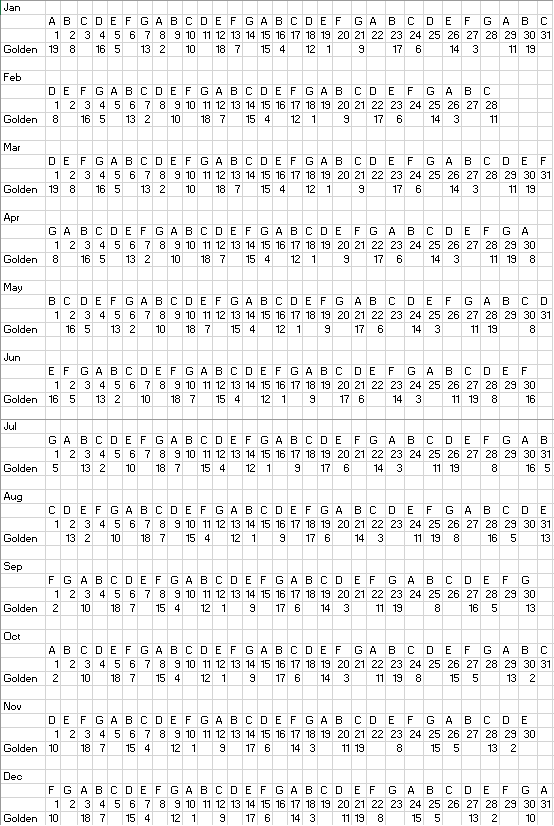 The Norwegian calendar from 1636 translated into an Excel Spreadsheet

I looked up a 2017 full moon calendar, and found that this calendar from 1636 totally accurate for 2017, and that we are currently on golden number year 18 in the cycle! I thought that was super cool. There were some days that the modern calendar predicted as being 12AM on the next day as predicted by MS 2913, which is I think due to daylight savings time shenanigans (I couldn’t find a full moon calendar not in daylight savings time, alas), but that I found to be an acceptable failing.

Then I looked up a 2018 full moon calendar, and compared it to the golden number 19 cycle on MS 2913, but unfortunately there were a few days in the second half of the year that were 2 days off – no longer could this be explained away with daylight savings time. This is hardly surprising, apparently every 300 years the rune calendars need to be adjusted by a day. What was really surprising was that it was 100% accurate at predicting 2017’s full moons!

So then I thought that, if I wanted to make my own rune staff, I would want it to be accurate for beyond 2017, so I tried to lay out my own rune staff. I’m thinking I’ll put my own “feast days” on it, like my birthday and Doc’s birthday and our anniversary and my siblings’ birthdays, along with some of the old feast days that I can find from photos of old rune staffs.

Again, there’s the issue with the daylight savings shenanigans, and I couldn’t find lunar calendars that always agreed with each other, but overall I checked this layout against every single full moon calendar from 2017 – 2050 and it is never more than a few hours off (which, recall, according to where those hours fall might predict the full moon a “day” early or late, but that’s it). I might tweak it some more before I actually carve it into a piece of wood, and of course my staff will have actual runes carved into it, but for laying it out I find using Arabic numerals and Latin characters the easiest (because that is what Excel supports). I also will not include month names or days of the month on my rune staff, because I want it to be very traditional, but I’ll admit those were very handy for quickly checking its accuracy against those online full moon calendars.

What I don’t like about this layout vs MS 2913 is there appears to be no consistent pattern, the gaps seem random and move around everywhere. I might have to study the Metonic Cycle a bit more to see how to get it updated for modern time, but still have a predictable spacing to the golden numbers. I dunno. It might also be weird spacing to accommodate leap years, which apparently the rune staffs did not traditionally account for. Despite the chaos this layout does seem to work very well for a very long time.

Feel free to use this layout for your own rune staffs, and/or tweak it to make it better, etc: 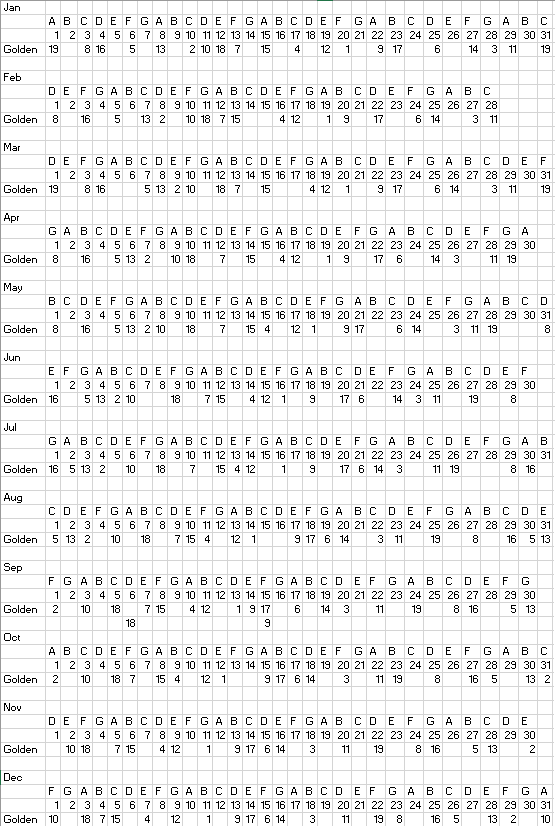 But, even though the spacing is chaotic, notice that the order of the numbers is preserved. The order should always be the same.

Hopefully this gives everybody enough understanding to make their own rune staves! And happy golden number 18 year!

Steen is a nerdy biologist who spends a lot of time trying to cultivate Chloroflexi. When she isn't working, she likes to draw comics, play video games, and climb.
View all posts by Steen →
This entry was posted in Norse and tagged Calendar, Full Moon, futhark, Nord, nordic, norse, runes, Scandinavian, Younger Futhark. Bookmark the permalink.

18 Responses to How to Make Your Own Rune Staff Calendar