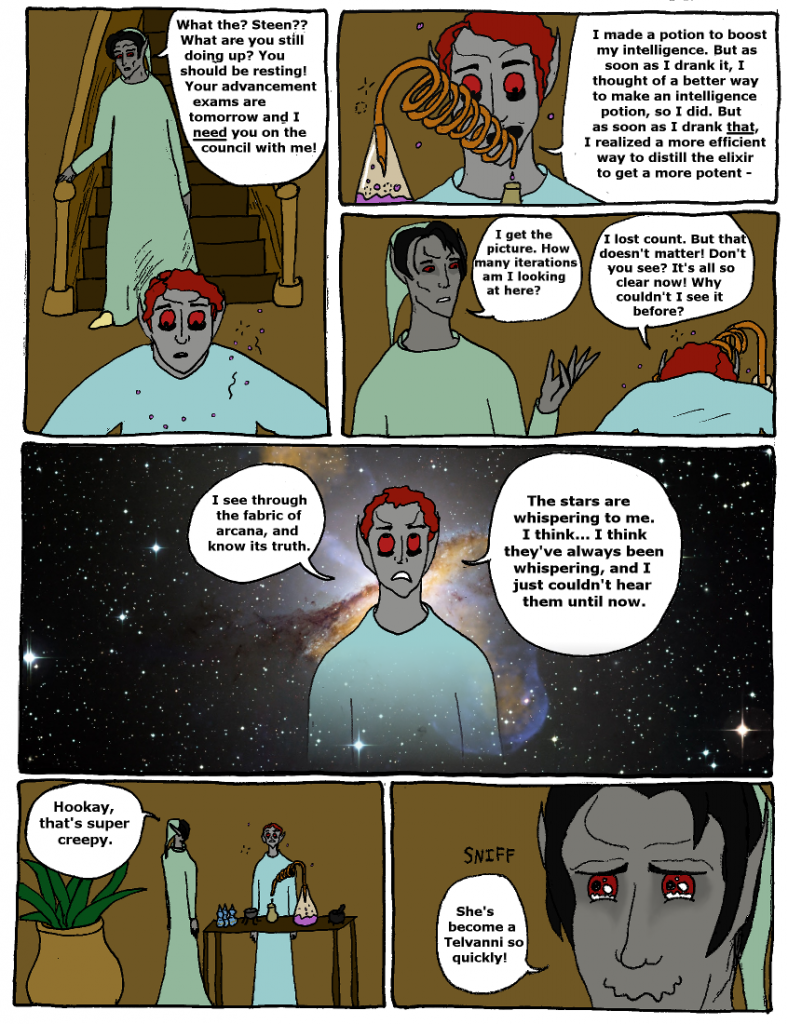 Apparently it is always pajama party time in Tel Vos or something. I don’t know why, but whenever I write the scripts for these comics, people end up in their pajamas. I guess it highlights the fact that Steen never leaves Tel Vos and basically lives there. Also, I thought it would be hilarious if Master Aryon wore one of those nightcaps that you always see in cartoons but nobody actually wears anymore.

Right. Recursive alchemy. We’ve all done it, just to see what would happen, of course. And we’ve all taken it to an extreme. By the end of my experiment, my intelligence was astronomically high, and the potions wouldn’t wear off for a kabillion hours or something like that. It was really more of a curse.

I made a strength potion, and it made me super strong! But I was so strong that as soon as I would strike a monster, my katana would break. The monster would die instantly, of course, but I’d have to repair the katana. And as soon as I’d repaired it, some other monster would come by, and bam! One strike later, my trusty katana would be broken again. I was so strong, I could no longer meaningfully interact with objects hewn by mere mortals!

I made a levitation potion. But I would levitate so fast, that gently moving forward would launch me on a complete circuit of the planet in a second. So I couldn’t really move or go anywhere, there was no finesse or control.

I made a personality potion. But then everybody loved me, even bandits, and nobody would ever attack me for any reason so it was very boring. I’d go into some dungeon and all the ne’er-do-wells would look up in glee at my arrival. “Oh my gosh, it’s Steen! Oh wow, she is soooo cool, I want to hang out with her!” Come on, you can’t attack people after that!

Pretty much most of the potions I tried were disasters. But it struck me that shooting your intellect into the stratosphere – shattering your mind by forcing the transcendent awareness of a god into your puny mortal meat brain – sounded like a very Telvanni thing to do.

One thought on “Recursion in Alchemy”