Why evolutionary narratives make me mad 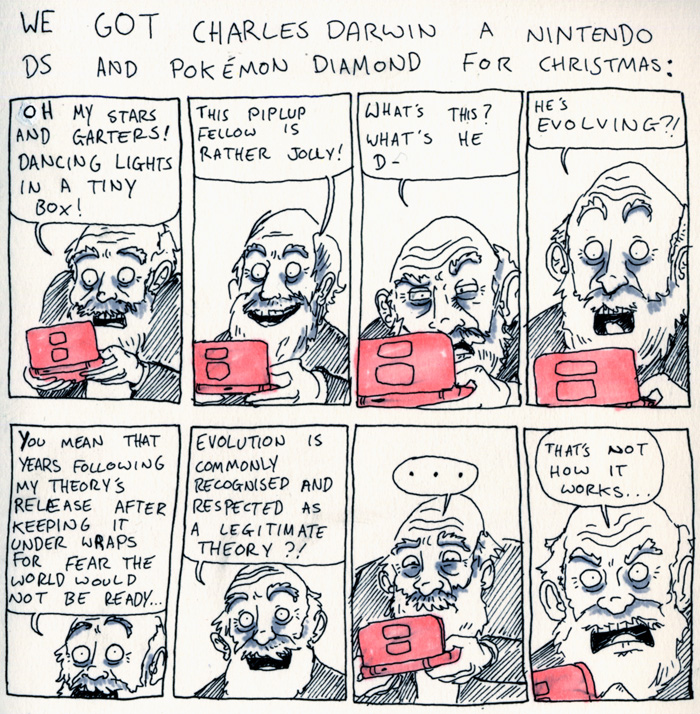 Darwin’s reaction in the last panel sums up how I feel about society’s perception of natural selection. This comic was made by the amazing Claude TC of Gronk Comics.

Those of you who know me would know that I’m always complaining about popular science writing and reporting, and how they gloss over key points or (and this is my biggest pet-peeve) how they tend to misrepresent natural selection (I believe this really does harm to our society as a whole).

So, what am I going to do about it? I am going to try reporting on science in a way that doesn’t resort to those dreaded “just so” stories that way too many “scientific” books and articles do. Usually popular writing in anthropology is the biggest butcher of natural selection, but I guess in that case it’s personal so it’s hard not to be. I want to make this post accessible as my own piece of popular science reporting, so non-biologists especially need to let me know if only biologists can read this.

Today I want to talk about Stuart West, and his ASM 2012 talk on Quorum Sensing and the Confusion about Diffusion (West et al. 2012), since his talk illustrates my point well and his ideas on natural selection are similar to mine. He also seems upset that modern society as a whole is hypnotized by evolutionary “just so” stories, and how even scientists are not immune to falling into those traps. The example Stu used was evolutionary studies on quorum sensing in bacterial communities.

Quorum sensing is a process where bacteria secrete molecules called “quora” into their environment. If a bacterium absorbs enough quora then it will start secreting molecules called “exofactors” which are enzymes that do work for the cell, outside of the cell. Right now, some people believe that there are two “opposing” hypotheses surrounding quorum sensing:

Stu explains that he’s seen too many publications by scientists trying to ratify one of these hypotheses or the other, but the problem with that is… it’s a false dichotomy! These hypotheses are not mutually exclusive, and therefore any experiments trying to confirm one or the other will only produce confusing results (which he claims they have).

Here we have scientists anthropomorphizing natural selection, wasting time and resources by doing so, and in the process confusing “mainstream” perception of natural selection and how it works! This is exactly why we need better popular scientific writing, and why those popular science books can make me so mad.

The more logical, less anthropomorphizing way of looking at the situation is:
Quorum sensing was selected for in bacteria. Quorum sensing affects individual bacteria allowing them to sense the rate of diffusion in the environment. Quorum sensing also affects bacterial population dynamics, allowing bacteria to act differently when enough cells have accumulated. It is meaningless to compare personal fitness versus group fitness, and to ask which was the selective factor. You will never get an answer this way.

That’s not to say that you can’t ever wonder anything about evolutionary biology. So what are some meaningful evolutionary biology questions you could ask about quorum sensing?
Does a trait have group benefit?
Does group size matter?
These are examples of questions that you can set up experiments for and get conclusive results, because they are true yes/no dichotomies and therefore can be used to form testable hypotheses.

*Update: West, S.A., Winzer, K., Gardner, A., and Diggle, S.P. 2012. Quorum Sensing and the Confusion about Diffusion is now published and can be read on the University of Oxford Department of Zoology website.

Steen is a nerdy biologist who spends a lot of time trying to cultivate Chloroflexi. When she isn't working, she likes to draw comics, play video games, and climb.
View all posts by Steen →
This entry was posted in biology, Microbiology, Natural Selection, Science, Science Reporting and tagged bacteria, biology, exofactors, quora, quorum sensing, science, Stuart West. Bookmark the permalink.

2 Responses to Why evolutionary narratives make me mad