Recently, I’ve felt like I’ve been stuck in a bureaucratic Gilliamesque hellscape. First, I got a bill from California DMV for a bounced check. A check that I never wrote, to register a car I’ve never owned. That was a nightmare getting that sorted out.

In the middle of handling that, I got a citation from Sacramento County for displaying expired registration on a car which I had sold (a long time prior to the citation being written). That has actually happened to me before with a previous car I had sold (it seems very common for the DMV to take a bajillion years to update the registered owner info in the database) but let’s just say that this one came at a very bad time.

So I took out my anguish in be best way I could think of. I sent Sacramento County an invoice for the price of the postage stamp that they forced me to buy and use. That just seemed like the final injustice. I had already spent hours on all of these messes (none of which were my fault, by the way), and then I am forced to use a postage stamp which I bought in order to prove to Sacramento County that they were the ones who fucked up and were punishing an innocent person for no reason. 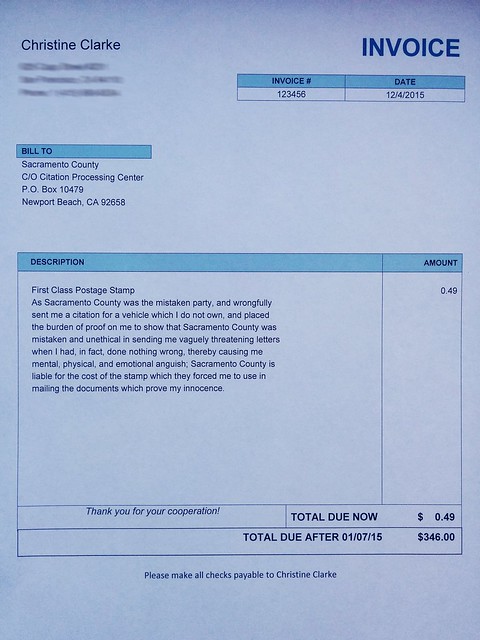 Allow me to give you an idea of where my mind was at the time. I received that $400 bill for the bounced check I never wrote to register a car I never owned. I called the DMV dishonored check unit, and explained the situation to them. They said that it must have been fraud, and that I would have to go down to a DMV in person and ask for an investigator who would analyze the signature and determine whether I had actually written the check or not. I said that I suspected that it was a simple clerical error, and that if they would just look at the check image, that would become clear to them. They said that the check was not in the system yet, and therefore they could not look at the image of the check. They promised that they would call me when the check image was in the system.

Meanwhile I got letters from the DMV threatening to send me to collections (which, they made a point of mentioning, would be bad for my credit rating) for this check I never wrote to register this car I’ve never owned. It started seeming more and more that DMV could just invent any random sum of money they wanted to collect, and send a bill to any poor unsuspecting victim, and extort them endlessly with threats of ruined credit until they just paid the DMV off to avoid the devastating consequences.

Everybody was asking me to prove that I never wrote this check, but how the heck would I even prove a negative? And why was the burden of proof on me, anyway? Surely they should be able to look up the car that the check was meant to register, and see that I wasn’t even the registered owner.

I looked up the license plate and VIN of the stupid car I’ve never heard of (they were included in the extortion letter), and it turns out it was a 2012 Fiat. I have never even been inside a Fiat, nor touched one, nor owned one. These points I made sure to tell every DMV employee I spoke with over this time period.

“Did you tell the person you sold it to that you would take care of the registration?” They asked me.

“I’VE NEVER OWNED IT!!!!!!!” I was beginning to fray at the edges. Perhaps even worse than being extorted by a corrupt government, I was being billed by an incompetent one. I was not fitting into the frame of reference that the employees had, and they were therefore having trouble understanding how to deal with me. Other than to, you know, encourage me to pay up.

My fantasy of being extorted by some evil greedy big brother almost seems preferable, since I suppose that would indicate that the government was actually accomplishing what it meant to. Instead, here I was an innocent victim trapped under some glitch in paperwork, and without producing the paperwork to show that the other paperwork was a glitch, the soulless bureaucracy machine would continue crushing down and down.

About two weeks later, I actually received a call from the dishonored check unit, saying “Hi Christine, YOUR check image has been uploaded, so now you can go down to a DMV field office and be sure bring your ID. Then we will fax over the check image for you.” (emphasis mine – they still believed firmly that it was my check).

I was super anxious to get this stupid thing taken care of, so I left work and went straight down to the nearest DMV field office. I gave the person at the desk my case number (that was given to me by the dishonored check unit), and explained the situation to them. They said that they could do absolutely nothing until I brought in the extortion letter which the DMV had sent me. I asked if they could just call the dishonored check unit like they said they would in the voicemail, and they insisted that the DMV was so large that they couldn’t just find the right place by looking up my case number or name. They said it was impossible without the original letter.

I almost started crying in frustration. I didn’t have the letter, because I had left it at home not knowing I would get that call, and I had received the call while I was at work.

“Just come back in with the original letter, and it will be easy!” they assured me.

“Well, it hasn’t exactly been easy thus far!” I quipped venomously and stormed out. I felt terrible about this, as I always make it a point to be extra polite and nice to employees that have to interact with me, but I was angrier and more frustrated than I have been in a long time.

Then on my way back to work, I stopped by my mailbox, and in there was… you guessed it! A citation for the Saturn I had sold in August (when I got my Leaf). The citation had been written in November. I immediately called the number listed on the citation, and explained the situation. Now, where the DMV employees all seemed sympathetic (if ineffectual) to my plight, and all acted like they believed me, this Sacramento County employee was cruel and cold and nasty. They kept snapping at me, and telling me that I was liable unless I could prove that I had sold the car, and they were very abrupt with me. Can you believe that, compared with this person, all the DMV employees I had interacted with seemed like incredibly kind and compassionate souls?

So I asked them what would happen if I didn’t do anything. They weren’t sure if they had heard me right.

“You know, what happens if I just… don’t do anything? If I don’t send you my copy of the release of liability? Does the car get towed? Get booted? I don’t think that would be so bad, since it isn’t my car.”

“If you cannot prove that you had sold the car before the citation was written, you will still be liable, and could be sent to collections.”

Well, godamnit. That is the government’s favorite extortion tactic, it would seem. Why couldn’t it just be, “we’ll impound your car”? WHYYYYYY?

I was incredibly upset, and the call with Sacramento County wasn’t particularly illuminating as to how I was supposed to prove it wasn’t my car. I called Nissan Infiniti of San Francisco (who I had sold the car to), and they talked me through which documents to send, and they said that if I had lost the documents I could go down to the dealership and they’d give me another copy (provided I brought my ID). Luckily they were incredibly helpful, and calmed me down a lot.

Then when I got back to work, I called the DMV dishonored checks unit again, because they seemed to be better at this stuff than the field office had been. And because, now, with this additional bullshit citation for yet another car I didn’t own, I felt more pressure to clear it up before more weird stuff got piled on me.

They immediately started going for the fraud angle again, but then I suggested we at least check if it was my check. I told them who I banked with.

“Huh. Strange,” they said, “this check isn’t from that bank. Have you ever banked with anybody else?”

“Huh. I wonder how this check got linked to your name, then. And it appears to be one of those temporary checks, so unfortunately there’s no name or address printed on it.”

I suggested perhaps the check had been written by a person with a very similar name to mine, but they dismissed that as an improbable reason. Then they had a spark of inspiration.

“You see, they have the plate number hand written here on the check, and you know how sometimes a written Y can look like an X…” I was so relieved that this was solved. “Now I have enough information and proof to put together a report and submit a request for correction on this. You don’t have to do anything else, because it isn’t your fault, and you will stop getting those letters.”

At that point, the DMV dishonored checks unit seemed like heroes to me. They actually did work and use ingenuity to figure out how I had been wronged, and put the effort in to correct it. Unlike Sacramento County. They don’t care if I owned the car or not, they just want to squeeze and squeeze until they get blood from a stone. They would not even lift their little finger if that was all it took to prove me right.

These were the thoughts swirling in my head after I gathered all the documents together proving that I did not own the Saturn at the time the citation was written. I was struck by how unfair it was that I was still out the cost of that stamp required to send in the documents (not to mention all the hours clearing these things up), and that employee had been so cruel and nasty to me on the phone and really made me feel like shit, so I drafted up my little invoice for $0.49, or the cost of a postage stamp. Which, naturally, goes up $346.00 if not paid by 1/7/2015. Because that is exactly the same shit they tried to pull on me.

It is just as a cathartic joke, I don’t actually expect any checks any time soon. But maybe it will also get some of the employees there to think about how dehumanizing and callous they are with people who are wrongfully charged, and maybe they will start to at least pretend to be more compassionate with them. Plus it felt really good to drop that sucker in the mail. My secondary (far less likely) fantasy for this invoice, is for the person who handled my phone call to see it, and feel terrible about themselves as a person. A girl can dream.

3 thoughts on “Stuck in a Bureaucratic Gilliamesque Hellscape”