As you might recall, two months back I started some batches of cheddar. I was really curious to know how different the cheese would be using raw versus pasteurized milk, and whether I would be able to perceive that difference.

It has now officially passed the minimum recommended time period to age the cheddar, so we cut one of each open to taste. I know that I said we had planned to wait four months before eating it, but I was just too curious. I mostly needed to know if it was a horrible disaster, but also I wanted to know if the two chesses were any different.

I have to be honest, I wasn’t really expecting there to be a huge difference. I thought there would probably be some subtle, nuanced flavors in the raw cheese that the pasteurized cheese was lacking, but that they would be overall comparable. 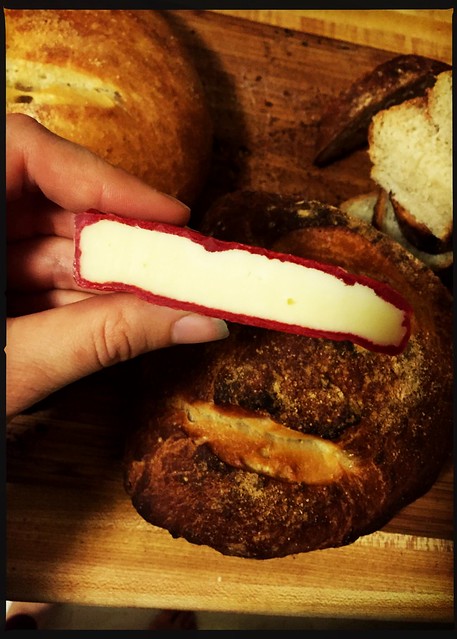 The two cheeses were incredibly different. Monumentally different. They tasted nothing like the same cheese. The raw milk cheddar was pungent, complex, flavorful, sharp and delicious. The pasteurized milk cheddar was also tasty, but much more understated and mild, and did not have a smell.

I also gave the cheese to my siblings to try, and many of them pointed to the raw cheese and said “That one is amazing, what is the difference between them?”

So, overall, the raw cheese seems to have won the popular vote. But I do still have a soft spot in my heart for the pasteurized cheese. It still tasted really good, at least as good as a nice store-bought cheddar.

Why did they taste so different? Well, I can only imagine that it was a combination of the flavor changes introduced by the pasteurization process itself, but also because there was a much higher diversity of bacteria in the raw milk cheese. I did only add one species to the milks, after all, so the pasteurized milk cheddar was basically a monoculture.

I think this had to have been a large contribution, because the difference was so clearly above and beyond the minor flavor changes that come from pasteurization. Such an unexpected result! But also, so exciting!

One thought on “Raw Versus Pasteurized Milk for Cheddar”