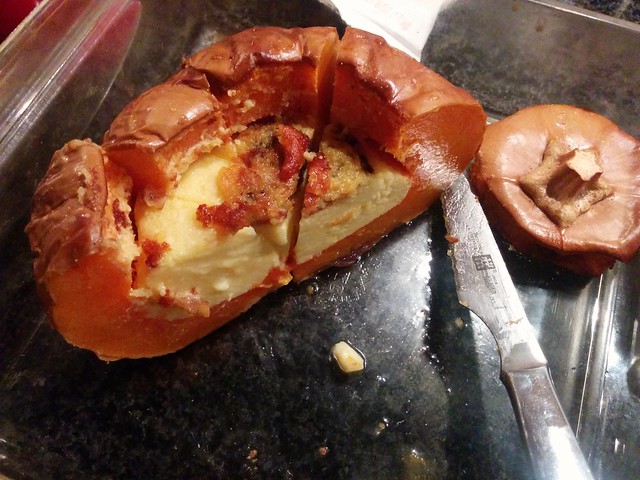 Doc and I had read somewhere that the pilgrims in Plymouth would not have had flour or wheat because they hadn’t been able to grow it yet, and therefore they made do with using a gourd as a “pie shell” instead of a traditional pie shell, and the claim was that this was the earliest pumpkin pie – essentially a custard-filled pumpkin.

Sounds reasonable to me, but I didn’t do much checking on these claims. Mostly I was interested in making a custard-filled pumpkin because that sounded delicious. SO WE DID.

It worked out pretty well, except for when I had the “clever idea” of using the pumpkin “hat” to cover it for presentation’s sake, and I put it on before cooking it and lots of the custard spilled out and that is why the custard isn’t filled to the brim of the pumpkin 🙁

But by golly, that custard filled pumpkin had a hat! 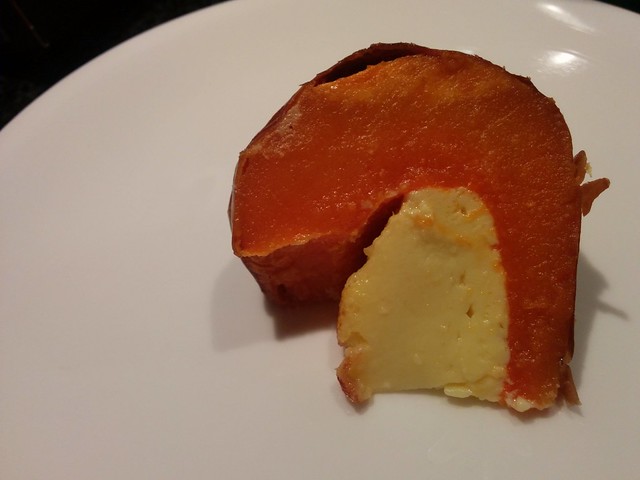 And I think the slices looked really pretty!

But if you try this, maybe consider not putting the hat on until after the custard has set. Or maybe not at all.

It was very yummy, like pumpkin crème brûlée. Doc mentioned that he might enjoy it with some spices on it, like cinnamon/nutmeg/cloves (the usual pumpkin assortment), but of course I countered that we first had to try it the way it ORIGINALLY WAS. As you might recall when I made Sambocade, it didn’t matter how good it tasted so long as it literally was a thing a medieval person ate at least once. Same dealio here. Except in this case, it is… 17th century people instead of medieval people. STILL.

One thought on “Custard-Filled Pumpkin”