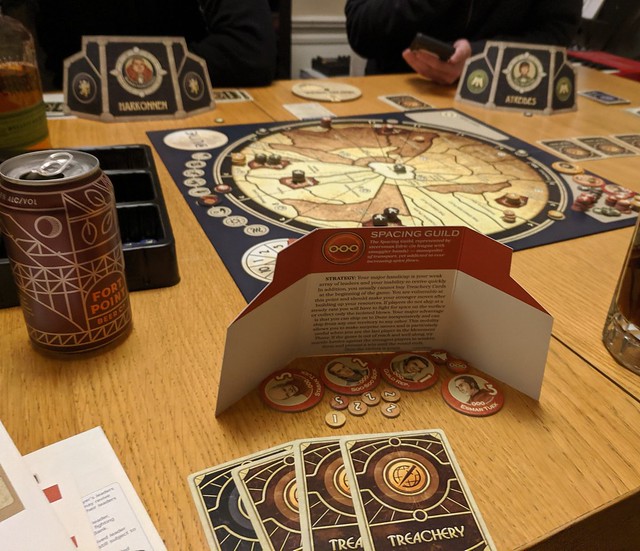 So we’ve been able to get a few more games of Dune in, and it is still fantastic. I’ve now been able to play as Harkonnen and the Spacing Guild, and the strategy/gameplay felt completely different each time due to the different rules for each faction.

Playing the Spacing Guild was a closer match to my personal preferred strategy, I think. The Guild’s goal for Dune is continued instability in the region, so people keep paying them for transport and so nobody (except them) gains a monopoly on the spice. So just mess with people here and there and tacitly fund insurgency (the Fremen player, chronically strapped for cash) and you will reach your goal of continued instability in the region. What are they going to do, not take the money? Of course if the Fremen start getting too powerful, then just say you can’t spare anymore spice until they’ve been knocked down a peg.

Contrast that with the Harkonnen, where you want to play aggressively and violently, and try to sweep the board as early as possible. Fortunately, I was able to drag it out and play the long game. After a while, the Guild and the Emperor were incredibly wealthy while everybody else was scrounging around in the dust after spice blows or leader assassinations. Playing the game as a wealthy character this time around felt suuuuper different, and certainly made a lot of the strategy different. I remember at one point in the game, Atreides said to Harkonnen, “We gotta watch out for these rich assholes over here,” indicating of course the Guild and the Emperor. The Fremen also felt very Fremen-ey, with their ability to just surge out of the desert, seemingly from nowhere.