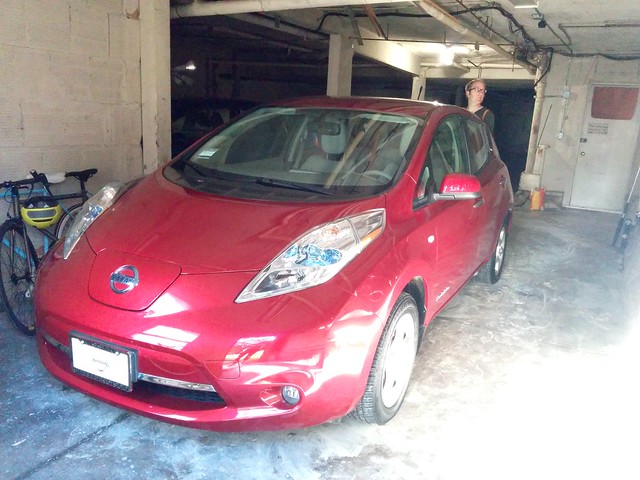 So this weekend I finally took the plunge and bought an all electric car. This is something that I have wanted really badly for a long time now.

I was going to wait until 2017 for Tesla to (maybe) release their $30,000 car (because I am an obsessed Tesla fangirl), but there’s no guarantee that will happen. Also, Nissan is practically giving away used Leafs right now. Partly because nobody knows how they will operate after 5 years (since they are so new) and partly because the technology is changing so fast right now. And also because of scares over battery capacity loss.

I decided to go for it anyway because:

1) Used Leafs are so cheap right now, this one will end up costing me less per month than I was spending on fuel for the Saturn, so no lifestyle changes are necessary, even if I drop it like a bad habit as soon as the cheap Teslas come out, I still come out ahead. Don’t know why I didn’t do this sooner.

2) This one has lived in the Bay Area all its life, and has therefore had negligible battery capacity loss (it has probably never been to Arizona), and it will continue to life in 60 – 75F temperatures so long as I own it. The person who owned it before me was leasing it, and turned it in at the end of its lease. So that’s pretty ideal, too.

3) The plugin charging station infrastructure has come a LONG way. I looked at the maps, and I can still pretty much get anywhere I want to go super easily (Santa Cruz, West Marin, Sacramento, etc) with no worries. I could probably even maybe make it all the way to Sac Town or Santa Cruz on a single charge, but there are enough charging stations along the way that I don’t really have to worry about it at all.

4) The batteries are replaceable, and if I did replace my battery then I would be getting the latest and greatest battery technology! The current cost of battery replacement for a Leaf is $5,500 which sounds steep, but that still brings the total cost of my Leaf plus hypothetical future battery installation to less than half of a new Leaf. And the cost of batteries are dropping every day. If I ever do need to replace the battery due to excessive capacity loss, even if it is just a year from now, this car was so incredibly ridiculously cheap that it would still be worth it financially to me.

I realize that electric cars are not a PERFECT solution, as not all of the electricity we receive comes from renewables and recycling the batteries could get iffy down the road. But even considering these issues, I think that it is still better than using an internal combustion engine that burns gasoline, and at least it is doing something. Plus, PG&E (which supplies my electricity) gets at least half of its electricity from non greenhouse gas producing sources. And almost a quarter of that comes from nuclear. Which I think is a good thing.

The only way we could ever hope to totally replace fossil fuels, barring some wild and huge scientific breakthrough, is with nuclear. I realize that nuclear waste presents its own sets of challenges, but those problems are largely localized and we now have the technology to minimize much of the environmental effects. Nuclear energy got its bad rap not without reason, but we really need to stop burning fossil fuels because those are causing systemic problems that we do not have the technology to fix.

Plus, I’ve read lots of anecdotes by Leaf users that installed solar panels, and are able to completely charge their Leafs from solar. Unfortunately right now I rent and my landlord doesn’t have much incentive to install solar panels since I pay for my utilities, but when I own my home then this sounds like an ideal solution to me!

One thought on “I Bought an Electric Car”