OK so for once I decided not to do a Morrowind comic. I’ve started working on an Oblivion comic instead! 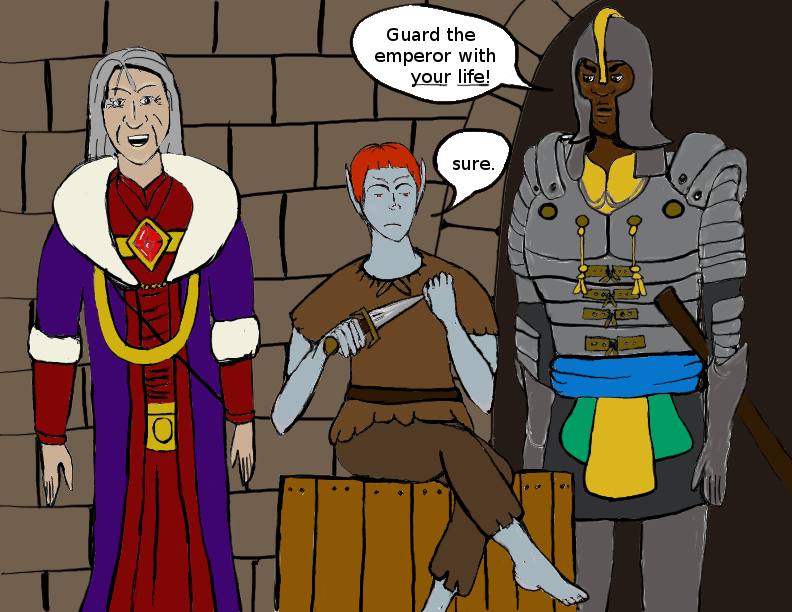 Let’s just say, the tutorial portion of Oblivion left me feeling… unenthusiastic about everything. Not to mention everybody was just so uncanny-valley ugly that I couldn’t even look at the characters without throwing up. So Oblivion-Steen was sassy, rude, bored, and didn’t even lift a finger to try and defend the Emperor.

That couldn’t dampen the emperor’s cheer, however, oh noo. He was still as chipper as ever while he yammered on to Steen about portents and dreams and destiny. Steen told him on several occasions to “can it,” because she didn’t care about gods or fate. The guards snapped at Steen to show more respect to the emperor, and she said she didn’t care because his government put her in prison. Frustratingly, the emperor told his guards to lay off Steen because he liked her because he had a dream about her. Neither the guards nor Steen understood why he put up with her while keeping such a sunny disposition.

When the cultist burst in and killed him, Steen didn’t even look up from cleaning her nails. Unsurprisingly, the guard (correctly) guessed that she was a professional assassin. Welp, I guess we know why she was in prison in the first place.

One thought on “Sworn Duty”