Now I realize that Kaushad, the Ashlander Khan of the Zainab tribe, specifically asked for a high-born Telvanni noblewoman and I’m about as low-born as they come. But sometimes you have to sacrifice specifics in the name of comedy! Also, I gave that guy a slave that I dressed up like a Telvanni woman and he seemed fine with that, sooooo…

Oh yeah. And after he figures out my ruse, congratulates me on being so clever and tricky, and says that he’s much happier with the bride I gave him than he could ever be with some stuck-up, arrogant, prissy Telvanni woman… I imagine at that point he probably got served a second helping of this face: 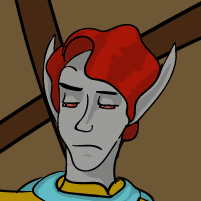 One thought on “A Plump Telvanni Bride”