You may remember when I embarked on my lactic acid fermentation, back in September 2014. Soon after the kraut was sufficiently sour for my taste (a month-ish), we binged on sausages and kraut for quite some time. I even bought a new head of cabbage, and back-sloshed a new batch of sauerkraut with the old culture. Well, it was technically back-sloshing, in the most basic sense of the term.

Back-sloshing is where you take some of the juice from your old culture and put it into a new culture. This speeds up the fermentation process, and produces a much more sour product. But instead of a dilution of 1:10 or anything like that, I just ate most of the sauerkraut out of the old culture, shredded up some more cabbage, and stuffed that into the same jar. The culture was technically diluted by the juice of the new cabbage, but that’s it. This back-sloshed kraut turned out super delicious, so we ate up most of that pretty quickly as well.

But then, I guess we stopped eating at home as much or something, and the last little bit of Kraut was forgotten about and abandoned in the jar. And yet, I still thought it could be more sour, so I refused to move the kraut to the fridge. I left it in the cupboard until today. So, about 5 months. I finally decided to crack it open and finish it off today because Doc bought some sausages. I was a bit curious, and a bit hesitant, about this culture I dubbed “The Ancient Sauerkraut.”

There was a huge film of beige sum on the top and on the bottom of the culture. But no mold, it looked like it was all just dead bacteria, so that was promising. Loads of dead bacteria. When I opened the lid of the jar, carbon dioxide bubbles burst to life, like they would when opening a beer. This surprised me, as I kept the water trap installed on the jar for the full 5 months, so I had assumed that any carbon dioxide would have escaped. But maybe the trap got jammed or gummed up with something? I guess it was a good thing I opened the Ancient Kraut now, before more pressure built up inside it.

And then, there was the flavor. The flavor had transformed more in those 5 months than I would have imagined (based on the trajectory of flavor changes that I tasted over the course of a month or so). There were so many intensely fruity, light, complex flavors going on in that ancient kraut. I’m assuming these were the esters that I’d read can be produced in late-stage lactic acid fermentation. The kraut really wasn’t even all that sour anymore – or at least, that wasn’t the main taste. The flavor really blew me away; the Ancient Kraut was the most amazing, complex, and delicious sauerkraut I had ever tasted. Of course I’m keeping the juice, to back slosh some cultures in the future. 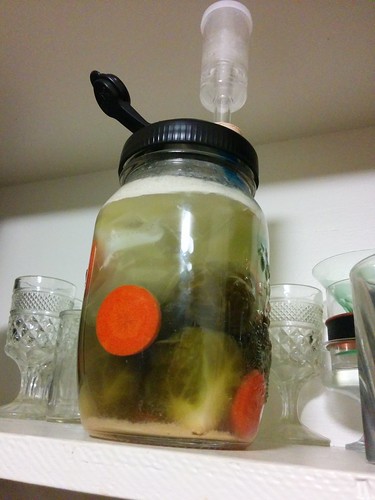 The Ancient Brussels Sprouts and Carrots. Note the film of bacteria on the top and on the bottom of the culture.

And guess what? I also some some 5-month-old Ancient Brussels Sprouts and Carrots. Since the brussels sprouts had a high sulfur content, I had always found the fermented brussels sprouts’ flavor a bit more objectionable (and stanky) than the kraut, but now I am curious to see if they have been similarly transformed.

Steen is a nerdy biologist who spends a lot of time trying to cultivate Chloroflexi. When she isn't working, she likes to draw comics, play video games, and climb.
View all posts by Steen →
This entry was posted in Food, Microbiology, Science and tagged fermentation. Bookmark the permalink.