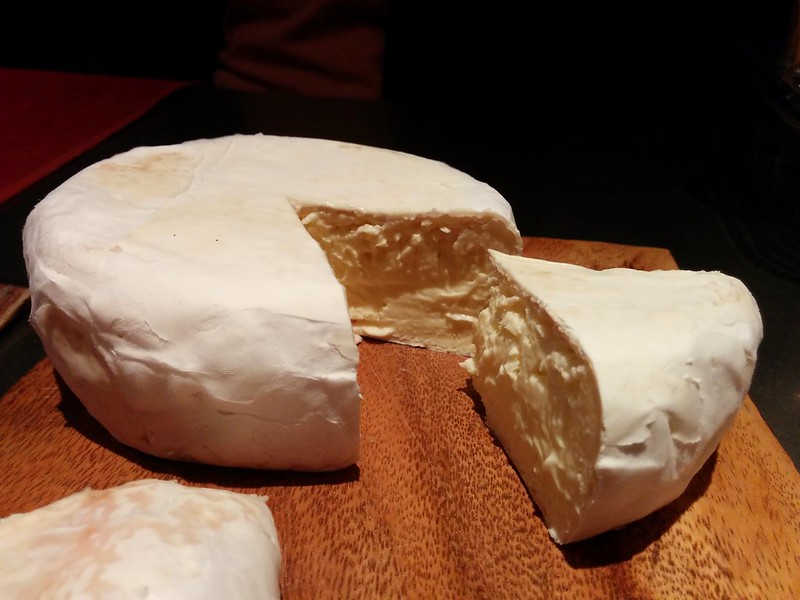 Gaze upon the gooey goodness!

GUISE. Our homemade brie turned out absolutely, deliciously amazing. I was so concerned after the earlier mishap and also because I had heard that you can get “totally adequate brie” by aging it in your fridge. But this tasted like amazing, high-end brie and was so ooey-gooey runny soft. Mmmmmmm. Add the fact that it was much easier than cheddar and doesn’t need to age as long, I will definitely be making brie again!

Here are the previous two forms of the brie, by-the-way.

I don’t know if I mentioned earlier, but one of the rounds of curds had a lot more moisture and was softer, whilst the other was much firmer. The instructions were kind of vague as to how firm they should be, so one I barely handled at all and the other I handled a lot when first flipping them in the forms.

The soft runny one (somewhat visible in the foreground here) was extravagantly soft and very pungent and flavorful as a cheese, because the cheese ripens faster with higher moisture. It also had a lot more mottling on the rind because moisture kept seeping out throughout the ripening process. The firmer (the main focus in the photo) one was much milder in flavor, more like brie that you have probably tried before, but was still luxuriantly soft and gooey compared to most other bries I’ve had. Both were amazing, but it was good to see how the moisture content affected the final product.

Steen is a nerdy biologist who spends a lot of time trying to cultivate Chloroflexi. When she isn't working, she likes to draw comics, play video games, and climb.
View all posts by Steen →
This entry was posted in Cheesemaking, Cooking. Bookmark the permalink.