Doc knows how obsessed I am with all things medieval, and he was so kind as to buy some tickets to a Medieval Feast event! I got so excited, I made a double hennin and everything.

This got me super obsessed with Medieval food, and soon I stumbled upon the Boke of Gode Cookery, and in particular the recipe for Sambocade (elderflower cheesecake). So of course, I had to make it.

But, like, of course I had to first make cheese curds! Because the recipe explicitly says the first step is the strain the whey from the curds.

I would recommend serving it with some caudell drizzled on top.

Note that, I didn’t care about improving the recipe or adding new-fangled things to better suit a modern palate. All I cared about was that I would eat a thing that was literally what a medieval person ate at least once. Because that’s who I am.

This led me into some trouble trying to interpret the recipe. The recipe appears to say to strain the whey from the curds and put them into the pie shell. THEN, add the egg whites and elderflowers and rose water. But the “modern translation” says to mix everything together until smooth, and pour the whole thing into the pie shell. So, which is it? Is this dish more like a cheesey crust with a meringue on top? Or is it more like a modern version of a cheesecake, with one layer of a smooth cheesey homogeneous mix?

Ultimately, I decided to go with what the “modern translation” said, figuring that medieval authors generally didn’t have the same level of explicit instruction that we do today, and that maybe the translators know better than I do what the intent was. But sometimes I wonder!

GUISE. Our homemade brie turned out absolutely, deliciously amazing. I was so concerned after the earlier mishap and also because I had heard that you can get “totally adequate brie” by aging it in your fridge. But this tasted like amazing, high-end brie and was so ooey-gooey runny soft. Mmmmmmm. Add the fact that it was much easier than cheddar and doesn’t need to age as long, I will definitely be making brie again!

Here are the previous two forms of the brie, by-the-way.

I don’t know if I mentioned earlier, but one of the rounds of curds had a lot more moisture and was softer, whilst the other was much firmer. The instructions were kind of vague as to how firm they should be, so one I barely handled at all and the other I handled a lot when first flipping them in the forms.

The soft runny one (somewhat visible in the foreground here) was extravagantly soft and very pungent and flavorful as a cheese, because the cheese ripens faster with higher moisture. It also had a lot more mottling on the rind because moisture kept seeping out throughout the ripening process. The firmer (the main focus in the photo) one was much milder in flavor, more like brie that you have probably tried before, but was still luxuriantly soft and gooey compared to most other bries I’ve had. Both were amazing, but it was good to see how the moisture content affected the final product.

Today, after the successes I’ve had with cheddar etc, I’ve decided to try my hand at mold-ripened cheese. This was inspired by reading that, if you don’t want to buy the Penicillium candidum, you can just use a piece of some other mold-ripened cheese (like brie or Camembert) to inoculate the new cheese. I thought that sounded easy, so I went ahead and tried it. 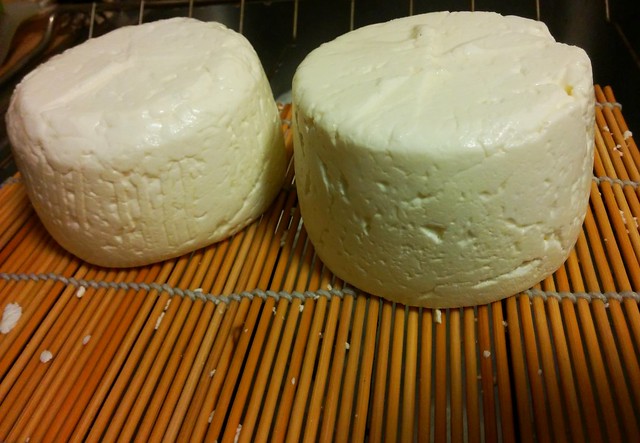 So far, so good. Let us see how the mold grows!