Well, I did the thing I said I’d never do: I tried out a character mesh/texture replacer mod for Morrowind. I had decided that the faces in the Races Redone mod looked pretty good and were very true to the style of the original faces, so a lot of the original feel/character seemed like it was preserved.

However, I did not like the hairs at all. I much preferred the Vanilla hairs. I just about spat out my drink when I saw Aryon’s new “haircut”… 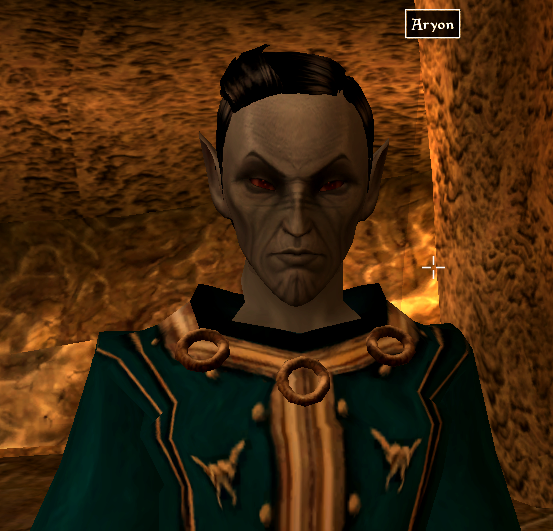 This is actual footage of Steen coming back from adventuring, and seeing (and reacting to) Aryon’s terrible new haircut that makes him look like he’s a 5 year old child about to go to get a family portrait:

I wasn’t a huge fan of Aryon’s old dorky-ass haircut, to be quite honest. But this… Peewee Herman monstrosity of a haircut was… irredeemable. Don’t get me wrong, it is gorgeously rendered, and absolutely 10000x better than anything I could make a mesh for. I just feel like it doesn’t quite have the same feel as the original, and it looks like it was made with a much younger character in mind. Which, given how few hairs there are to choose from in Morrowind, maybe it was.

The new face is great, though. It is pretty much how I’d always seen him in my mind. The facial tattoos are a bit of creative license here, since the original texture did not have any. But, they’re subtle and such things are common enough in Dunmer society that I don’t mind them.

I didn’t like Steen’s new hair, either. I hated how it was luxurious and flowing and beautiful, because Steen’s hair is none of those things and it never should be. So I suppose maybe she waited too long between haircuts here in this photo: 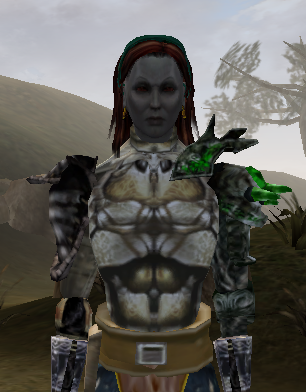 Again, the face is great, but ugh the hair >:-( no way would Steen be caught dead with hair like that. Or even be willing to maintain it, for that matter.

I also don’t like anybody else’s new hairs, but obviously Steen and Aryon are the most important characters for me to be happy with.

So then I had to go on this mad goose chase to get the vanilla hairs without the ears (because then otherwise he’d have 4 ears), but alas then there was still a problem with the hairs clipping into the new face model, making Aryon and Steen both have bald patches.

Too bad, too, because if not for the clipping, the aesthetic of these new faces plus the vanilla hairs is PERFECT for me. Like, exactly what I was looking for. I thought everybody looked great.

So I set out on a gallant mission to tweak all the vanilla (earless) hairs in Blender to solve that clipping problem. But, several hours in, and now I apparently have like 5 different versions of Blender installed (because that’s important for Morrowind meshes… for some reason… I don’t even know anymore), and yet ANOTHER version of Python installed on this machine, non-working .nif files all over the place… it’s a madhouse. I might… I might just go back to Vanilla faces and hairs. Because the clipping is a tiny bit too much to ignore.

And also also… I am partial to the tall rabbit-ears of Vanilla Morrowind mer. These stumpy little Skyrim-style mer ears are not cartoony enough for me, I guess. I’m just too used to all the original meshes and textures, I have trouble adjusting to anything else.

I might have just wasted an entire day on this, because I nuked everything and went back to vanilla meshes and textures. Oh well! It was funny to think of Aryon getting a terrible haircut. Luckily it grew back 😉

2 thoughts on “Adventures in Mesh Replacers”