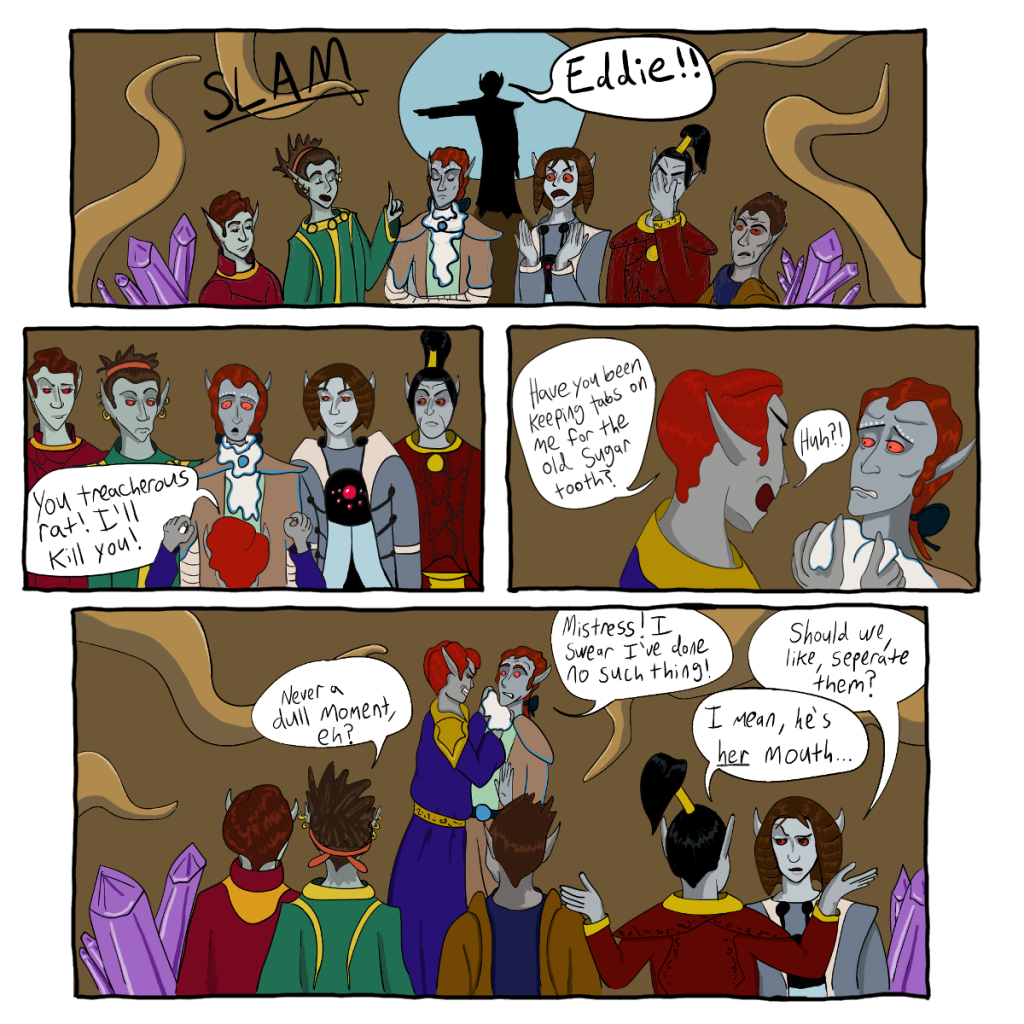 Re-re-replaying Morrowind, I’ve realized that it gives Fast Eddie a very different context depending on whether you finish the House Telvanni questline BEFORE contracting corpus, versus after contracting corpus.

In the past, I did it after contracting corpus, so it went like so:

I’m some random loser doing quests for Caius, and I am not (yet) a member of House Telvanni. Caius mentions Eddie as being one of his informants, and an (unreliable) contact for the inside-scoop on Telvanni affairs. I eventually join House Telvanni, and I choose Eddie as my Mouth, because we both have a history together of working as informants for Caius and the Blades, so there’s less chance of him blackmailing me because if he outs me I’d out him. Mutually Assured Career Destruction. Eddie is ambitious with where he wants to go in House Telvanni, so he probably wouldn’t risk his own career by outing Steen.

This latest play-through, though:

I barely delivered the package to Caius, and then ran off and became Archmagister of House Telvanni, and screwed around with a bunch of other stuff (Twin Lamps, Thieves Guild, etc). I pick Fast Eddie as my Mouth on Aryon’s recommendation. Eddie serves me as my Mouth for about a year or so, and I have no knowledge of his involvement with the Blades. Eventually I get bored and come back to Caius and start doing his quests again. Eventually Caius tells me that Eddie is one of his informants. BETRAYAL!!! Now it seems like Caius didn’t trust me, so he bought off my close protege to keep tabs on me and report back periodically! And all the while Eddie never mentions a word about this! Hey, I give Aryon *my* undying loyalty (even above loyalty to House Telvanni or anybody else), so I expect no less from my own protege!

This, combined with the fact that Eddie always asks for me to help him with his chores (the chores he’s supposed to be doing *for* me), makes me think my relationship with my Mouth isn’t as great as it could be. Aryon thought he had it bad, with a protege that left her junk all over his tower, well at least he didn’t have disrespectful traitorous Eddie.

I (the player) actually do like Fast Eddie and the things he fetches for me are pretty spectacular, but the order of events in this play-through means that he is not in good standing in this Nerevarine’s eyes, alas.

Also, you guys, I like all those comics and drawings of the Telvanni Masters bickering as much as the next person. I LOVE them. They’re my weakness. But let’s face it: council meetings would just be all the Mouths bickering on BEHALF of their Masters. The Telvanni Masters are never all together by design. Partly because they DGAF about doing politician work so they’d rather their representatives handle everything, and also partly because some Master would likely slay some other Master every other meeting, and the Masters don’t want to get slain. Hence, I’ve only drawn the Mouths. So there.

Also, I’d imagine this might not be the first time one of the Masters attacked their Mouth in the middle of a Council session. I don’t think that would be *common*, all I’m saying is, I’m sure it’s happened at least once before this.

2 thoughts on “AKA Eddie The Rat”