Who Were the Valkyries? 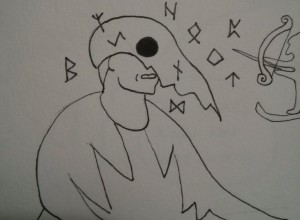 Who were the valkyries?

Ahh, the mysterious raven-women. After each battle, about half of the heroes slain would go to feast forever with Odin in his hall called Valhalla, while the other half of slain heroes would go to feast forever with Frejya in her hall called Sessrúmnir. Slain heroes that were fighting because they just absolutely loved fighting, and/or were Berserks went to Valhalla. Slain heroes that were fighting to defend something, such as land or loved ones, went to Sessrúmnir. If your loved one (husband, wife, lover, etc) went to Sessrúmnir, then you were allowed to join them in Frejya’s hall after you died, too. However, only the bloodthirsty Berserks could ever get into Odin’s hall.

This is how Odin and Frejya choose to amass their own personal army of heroes, called the Einherjar. Odin believes that ferocious Berserks with an insatiable lust for carnage will make the best army for his purposes. Frejya believes that heroes with something to believe in, love, and defend will make the best army for her purposes. Neither god is right, neither god is wrong. Both have mighty armies, capable of amazing feats.

In Old Norse times, women often fought and died in battle alongside men. They didn’t have to disguise themselves because there were no rules against their participation. However, most women stopped going to battle either once they married or had children, so that they could make sure their family was taken care of (and also so that the children wouldn’t lose both parents to battle).

Overseeing battles, accounting the heroes, and picking over the dead are some of the tasks of the Valkyries. Valkyries are the ferocious Seith-women (“witches”) that died in combat, and were themselves granted access to either Valhalla or Sessrúmnir (which, presumably, depends on whether the Seith-woman was a berserk or not, just like everybody else, but this is not clear).

Valkyries were represented by ravens, and their mounts represented by wolves. They would circle battlefields shrieking and calling out their supernatural cries that would chill the spines of even the bravest of warriors. After the battles were over, the ravens and wolves (being eaters of carrion and scavengers) would descend on the corpses, picking them over, tearing through them, selecting the Einherjar from the fallen.

Steen is a nerdy biologist who spends a lot of time trying to cultivate Chloroflexi. When she isn't working, she likes to draw comics, play video games, and climb.
View all posts by Steen →
This entry was posted in Norse, Stories and tagged Berserker, Einherjar, Frejya, Nord, norse, odin, Seith, Valhalla, Valkyrie. Bookmark the permalink.

1 Response to Who Were the Valkyries?