Where did trolls come from?

This series is an attempt to provide some backstory for my 2013 24-Hour Comic. 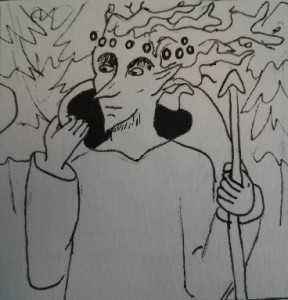 Where did trolls come from?

That is a very good question, and I am very glad you asked it!

One day, while Thor and Loki were hiking through the wilderness, they came upon the remains of a fire. In the center of the char, was a cooked heart. Loki, who was very hungry, picked the heart out of the ashes.

“Hey, check it out! It’s still good!” He exclaimed, looking it over and brushing it off.

“Aw, gross, man. Don’t eat that.” Thor pleaded weakly, knowing that Loki will eat everything in sight if given the opportunity, and therefore any of his protests about how gross something is are usually futile.

“Why not?” asked Loki while taking a bite, “It’s still good. And I’m sick of eating caterpillars and squirrels and whatever else we’ve been finding out here. Why can’t we kill your goats again?”

“I’ve told you, I don’t want to kill them more than once a week, otherwise they start to get skiddish.”

“Well, that’s why I’m gonna eat this heart!” exclaimed Loki as he finished off the organ. Unfortunately for Loki, what neither of the Aesir knew, was the heart was that of an ancient and powerful Jotun witch. Nobody knows how she died or why her heart was there; maybe a spell misfire, maybe there was a big wizard’s duel (that she lost), maybe she died of natural causes and this was the remnant of her funeral pyre.

However her heart came to be cooked and buried in a pile of ash, the one thing we do know is that it was still full of the witch’s magic. Once inside Loki, the heart magically forced him into his woman-form, and impregnated woman-Loki with the witch’s magical genetic material.

“Dangit Loki, why are you always getting yourself pregnant?” asked Thor after they made it back home and Loki began to show, “This means we can’t go exploring the forest until you give birth. Is sex as a woman really that great?”

“This time, it is not because I had sex as a woman!” Loki retorted indignantly, “I’m telling you, it was that heart I ate!”

About maybe 10 months after eating the heart, Loki gave birth to the world’s first troll; this troll was the progenitor of the entire race of trolls. Of course, this also means that Loki and the mystery witch are the progenitors of the troll-race. Nobody knows if that troll grew up to mate with a Jotun or an Aesir, or even if the first troll was a male or a female. Since the race of trolls is more ancient than humans, it is unlikely that trolls have very much human blood in them. It is much more likely that trolls married Aesir and Jotun until they eventually disappeared into the forests and down into the mountains, and kept to themselves as their own race.

Given their progenitors (along with their strange origins), it is no wonder that trolls are notoriously cunning, sly tricksters with an extraordinarily powerful command of magic and the ability to shape-shift. That sounds like pretty much what I would expect with parents like Loki and a witch.

Trolls are so well known for their magic and mischief, that many Scandinavian-language words which are related to magic and/or mischief have the root word “troll” in them. “Witchcraft” is “trolldom;” “mischief” is “trolltyg;” “to cast a spell” is to “troll.” Even in English, to purposefully stir up trouble and cause mischief is “to troll” somebody.

Since trolls are so secretive, locked away in their mountain-halls, not much is known about them. No two folks can even agree what trolls “really” look like, since they can change their shapes at will. The only thing that can be agreed about their appearance is that trolls can shape-shift.

Some say they look just like humans do, and that the only way to tell if a person you meet in the forest is a troll or not is by how fine their clothes are. The forest is not perilous to trolls, so they will often wear beautiful gowns or fine linens in the middle of the wilderness, which is something we both know that humans don’t do. This seems the most likely, since they are directly descended from two people that look just like humans, themselves.

Some say they are enormous giants, or that they have tusks or tails or horns or other traits that distinguish them from us. This could be true, too, given their magical origins; or it could be that trolls often like to use their ability to shape-shift to make themselves look unique or powerful. Maybe trolls don’t even have a true form, and simply look however they wish.

One thing that trolls love even more than shape-shifting, is playing tricks on humans. Sometimes they are harmless tricks, but lately some trolls have been responding to the human encroachment on their forests and mountains, and the tricks on humans have gotten more sinister.

Jump to an article in my Norse Backstory series:
1) Where did trolls come from?
2) Whatever are “Runes”?

Steen is a nerdy biologist who spends a lot of time trying to cultivate Chloroflexi. When she isn't working, she likes to draw comics, play video games, and climb.
View all posts by Steen →
This entry was posted in Art, Doodles, Norse, Silly, Stories and tagged 24 Hour Comic Book Day, Comics, folklore, Loki, mythology, norse, Thor, trolls. Bookmark the permalink.

5 Responses to Where did trolls come from?