Sometime during our wanderings this weekend, Doc and I stumbled upon the most amazing garage sale ever. Amongst the many awesome things we found there, we got… 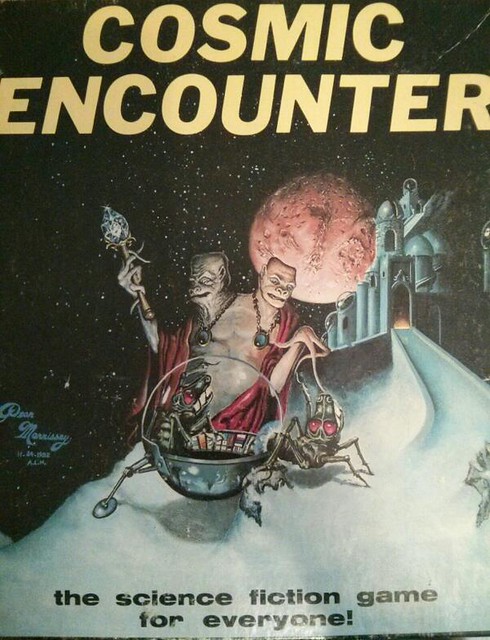 this awesome board game, Cosmic Encounter!

Cited as the progenitor of Magic: The Gathering (and many other games where the game-play changes every time you play it), it seemed too amazing to pass up. It also came with a bucket of expansion packs, but we thought it best to play the original game first before trying to comprehend the expansion packs.

I have enjoyed it thus far, but I have only played it with 2 and with 3 players. I imagine that it really starts getting good with 4 players, due to the ability to forge alliances with players, and team up against others.

You randomly draw one of a kabillion different wacky alien races (the original game only had 15 races, but the box we got has about 75 races), and that determines your alien power for the game.

Some aliens, like Void, have powers that seem frustratingly powerful; but if you have an alien like the Healer in play, then the Void really doesn’t seem so scary anymore. So I guess this really adds to the whole “a different game every time you play!” tagline.

So far, I like Guts of Glory better, but mostly because Guts seems more complex. Therefore, I will probably enjoy Cosmic Encounter more and more as we add more of the optional rules and expansion packs to it. I really love the old science fiction art by Dean Morrissey and the wacky vibe. I should also point out that Cosmic has more opportunities to be totally different each play than Guts has, due to all the different strategies that come with the different races.

To give you an idea of the sorts of issues that can arise during a play-through of Cosmic Encounter, I present to you this discussion on Void vs Zombie.

Steen is a nerdy biologist who spends a lot of time trying to cultivate Chloroflexi. When she isn't working, she likes to draw comics, play video games, and climb.
View all posts by Steen →
This entry was posted in Boardgames, Gaming. Bookmark the permalink.