There is a way to make a milk liqueur that you can add to acidic /fruity drinks, and it won’t curdle! Sure, this is mostly because it has already curdled, but hey! You still get a surprising amount of milky delicious flavour from it. So much so, that I am willing to bet that letting the milk infuse the alcohol for a long period of time allows many more of the alcohol-soluble flavors to leave the milk and go into the alcohol than you would get if you simply added whey to alcohol as a shortcut. You even get that miraculous milky velvety texture.

It is easy enough to make your own, you simply mix equal parts milk, sugar, and vodka together and let it sit for two weeks. Hopefully by then, the milk proteins will have denatured and separated out from the liquids and the alcohol. If this has happened, you should then filter out the curdled solids with a cloth or coffee filter, leaving a rich golden liqueur for sipping or mixing (discard the solids). 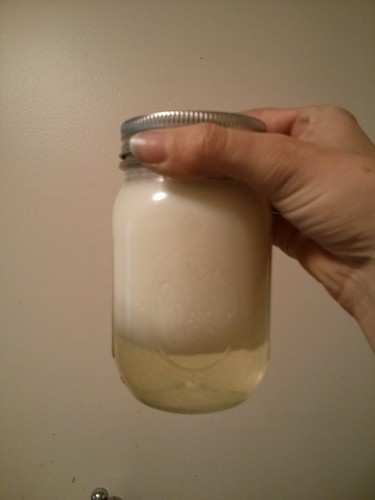 Some milk liqueur in progress.  You actually want/need it to separate like this. And it will get yellower as it ages.

I was lucky enough to get some separation doing it this way, but apparently this doesn’t always work. Some people suggest putting a lemon, orange, or other citrus fruit into the mix. The acid in the fruit will help denature the proteins and speed up the clumping process. However, I just wanted a pure milky flavour, without any overpowering citrus in the mix. Especially if I want to mix this into cocktails, I don’t want the extra complexity of orange in there. Don’t get me wrong, I can imagine that this could taste like a delicious Creamsicle. Just not what I was going for. Apparently, some people also put chocolate into the mix. Again, sounds delicious, but not the pure essence of milk that I want. 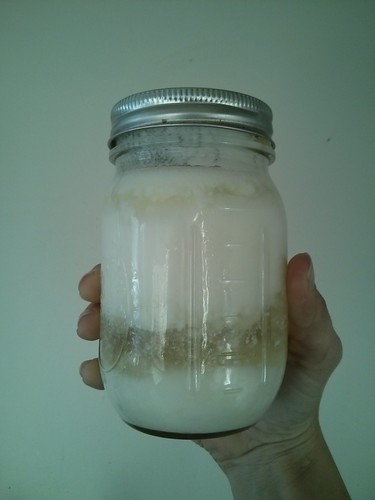 So is there some other way to make sure your milk will curdle correctly, every time? I guess you could use vinegar, but that would be even grosser than lemon. And then it hit me… why not use cream of tartar?

All you need is a more acidic environment to denature the milk proteins, and cream of tartar is a relatively flavourless acid – one that is often added to pastries which need acidity for the chemistry to work, without adding any offending flavors.

Seemed like it should do the trick, so to the second batch (which was about 2 cups total) I added 1.5 teaspoons of cream of tartar before sealing it up and mixing. This worked perfectly! By the second day I already saw loads of separation, and the alcohol/water phase continued to get richer and more golden as time went on. It was absolutely a better result than without the acid!

Now I can make drinks with shrubs (and other acidic flavours) in addition to milk liqueur, and not worry about it curdling and becoming gross. 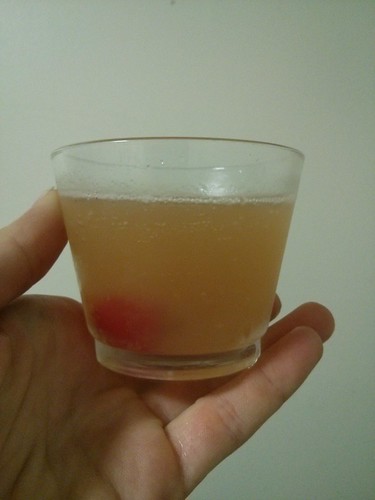 Whiskey, cherry shrub, milk liqueur, and a cherry. It was surprisingly milky and delicious. How often can you taste these flavours together? Not very, since the milk normally curdles! This is a breakthrough.

I hadn’t considered this before making milk liqueur, but this could even the be the first time you get to taste milk mixed with acidic ingredients like lemon or shrub, because the 2 week infusion process brings all the milk flavours into the liqueur while also removing the curdling elements. So essentially this liqueur opens up all new possibilities. Delicious possibilities.

Steen is a nerdy biologist who spends a lot of time trying to cultivate Chloroflexi. When she isn't working, she likes to draw comics, play video games, and climb.
View all posts by Steen →
This entry was posted in Food, Recipes, Science and tagged cocktails, drinking vinegar, homemade, Liqueur, mixology, shrub. Bookmark the permalink.