I’ve recently had a realization that I wanted to share, about the chore that Gothren’s Mouth (Mallon Ryon) gives you – to ask Baladas Demnevanni three questions. It always stood out to me as a strange and deceptively simple quest, even the first time I did it, with possibly more going on than meets the eye. You must locate Baladas and ask him three questions, but Gothren is not interested in the responses to said questions, nor is he interested in whether Baladas even answers them at all. On my very first playthrough, I was naive and thought they must just be buds, and Gothren just wanted to make Baladas think. But I think I have figured out what is going on – I think you are a patsy (possibly one of many given deceptively simple chores) manipulated into helping Gothren flush Baladas out of hiding. Possibly so Gothren can send somebody to kill Baladas.

There is precedent in-game to suggest that Telvanni politicians flee from Telvanni territory and go into hiding when “forced to retire from politics,” and there is enough evidence to suggest that Baladas is one such Telvanni politician. Given Telvanni tradition dictates that murder of your rivals is a perfectly acceptable means of removing obstacles, flight is a reasonable response. And it makes sense that said Telvanni politician would be a target, even in retirement, because (as we see with Eddie and Baladas) if/when the tides turn then they have a habit of coming back.

Fast Eddie has fled to Balmora, and he tells you quite explicitly that his political career was ended abruptly when Dratha and Neloth conspired against him and forced him out, and that he is now in hiding until things blow over.

Baladas used to serve on the council, but he says he’s sick of the constant rat race that is Telvanni politics. We know from villagers in Gnisis that Baladas arrived there about twenty years ago, and has holed himself up in an old Velothi tower like a hermit. It seems likely to me that Eddie and Baladas were both forced out around the same-ish time, since they are both considered allies/assets to Aryon and therefore I think aligned politically (Aryon asks you to convince Baladas to re-join the council so you and he can have more support and political allies, and Aryon is the one to suggest Fast Eddie to you as a potential protege – so presumably the three share similar politics). By the transitive property, this implies that Baladas and Gothren are political opponents (we all know how Aryon feels about Gothren).

This suggests that about 20 years ago, the Telvanni council had a much larger progressive coalition that was forced out, with Aryon being the main holdout that they haven’t been able to get rid of (unless his rise to power came after that, but >20 years seems about right for how the people of Vos talk about him; I think he’s just managed to hold on).

If/when you find Baladas Demnevanni, he is all the way over in Gnisis – about as far from Telvanni territory as he can get – and he is holed up in Arvs-Drelen, with skeletons and summoned daedra patrolling the halls which will attack anybody on-sight. On top of that, Baladas is behind a locked, trapped door. This guy is not rolling out the welcome mat. At first I just thought it was because he was a hermit, and literally didn’t want anybody disturbing him, but now that I think he is in hiding, I think he is taking all these precautions to protect his life.

It seems to me now, that Gothren wasn’t even sure whether Baladas was still alive. He wants to confirm whether Baladas is alive, and if so he is starting some of the early moves in flushing him out. That’s what the whole “three questions” thing was about. That’s why Gothren doesn’t care what the answers are, or even whether the questions are answered at all. Just that you can find him and physically speak with him face-to-face.

When you turn in the quest, Mallon Ryon says “So you have spoken with him? And what did he say? Well, no matter. I did not believe you could convince him to answer all the questions. But Archmagister Gothren will be quite interested to know that Baladas is alive and well.” which all of a sudden, on this latest playthrough, sounded so sinister and foreboding! I never noticed that possible tone before. 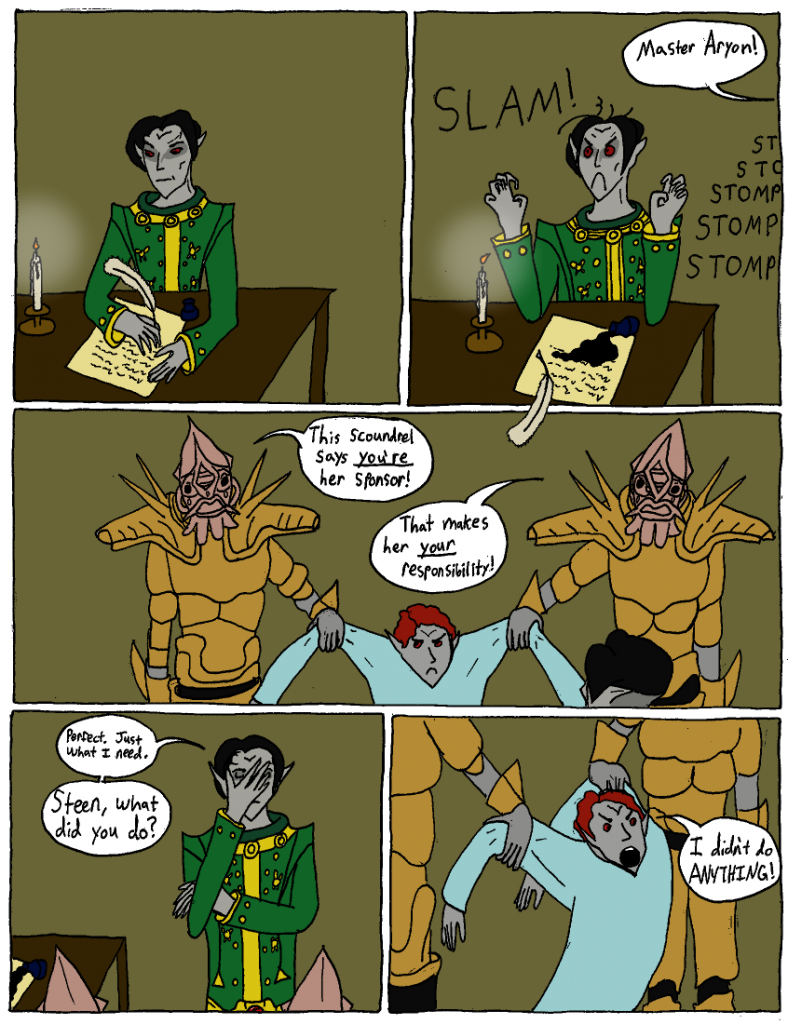 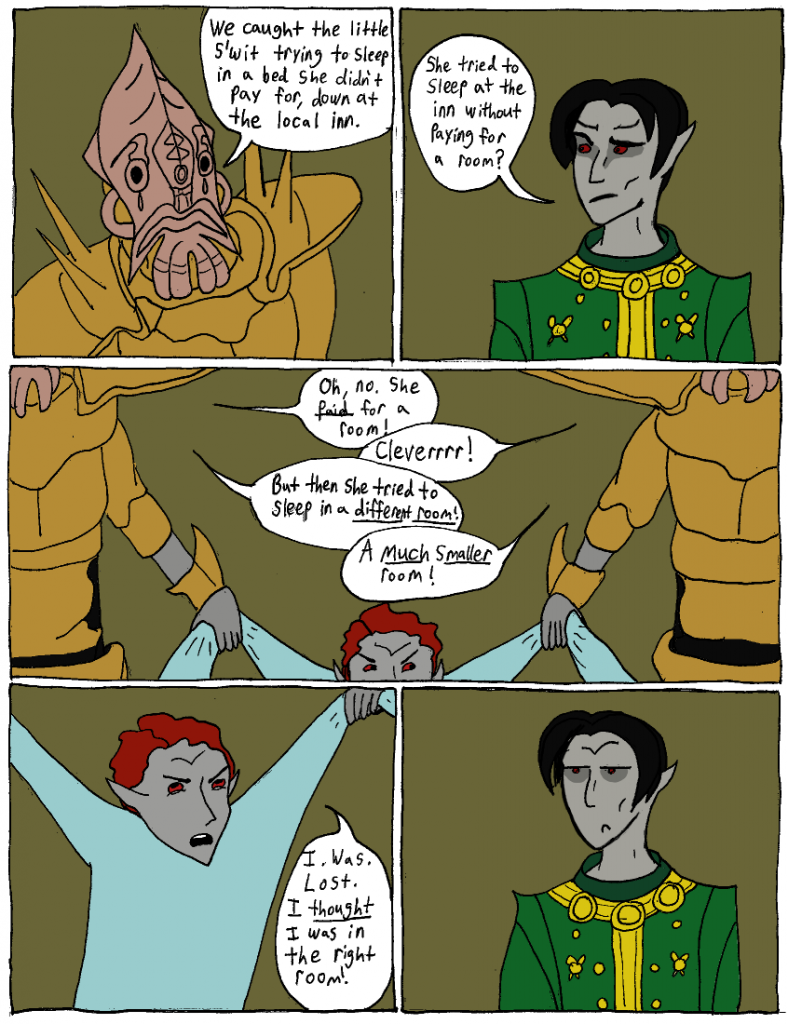 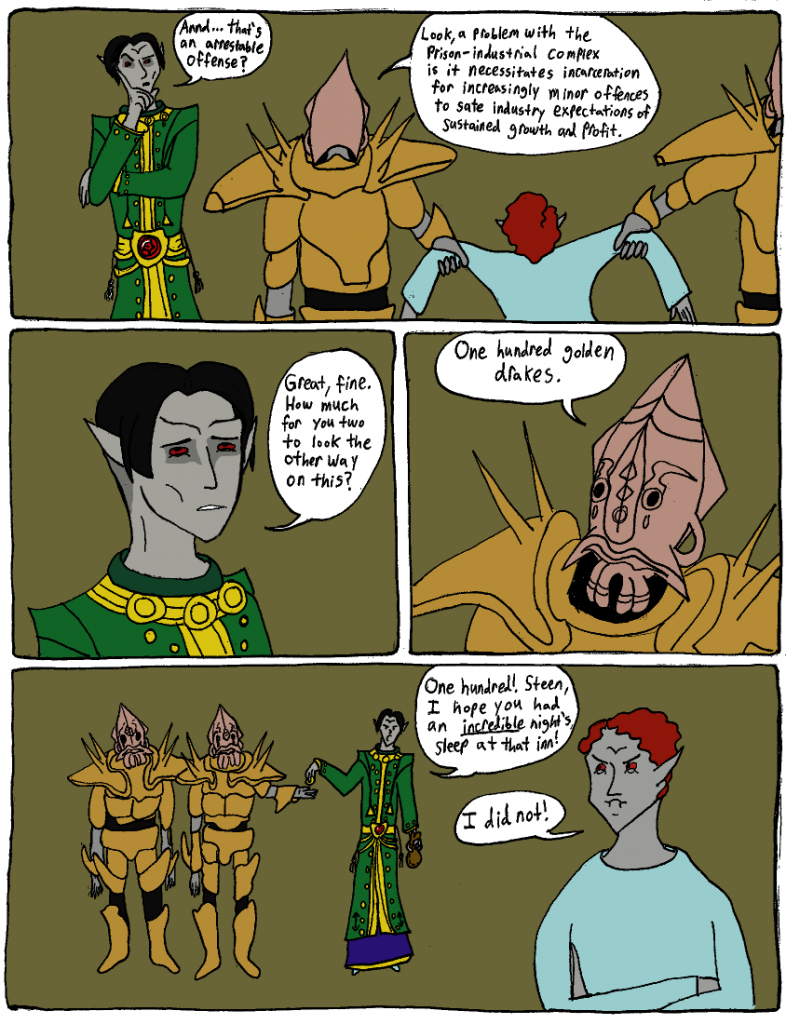 I drew a comic based 100% on real, actual (Morrowind) events. I’ve also written a prelude to it because I think those events were hilarious as well. At least everybody in Morrowind is so cynical that nobody even pretends the guards do anything other than participate in an exploitative system that does nothing to deter actual crime.

Steen was tired and beat-up and dusty from trekking all across Morrowind. She was feeling bad about always crashing at Aryon’s place, and besides the local inn was closer, so she went in and asked to get a room for the night. She paid the innkeep 10 golden drakes.

“To get to your room, you just have to go down the first flight of stairs on your right,”

“Then at the bottom, go 10 doors down, and go through the first door on your left after that,”

“Then, you head down that corridor, and go 10 paces until you get to 3 more doors,”

“Hold on, I think I better be writing this down or something…”

“Then go through the eastern-most door, and immediately turn left,”

“Go up a half-flight of stairs at the end of the hall, and there will be 5 doors on each wall. Face to the West, and your room is through the door directly in the middle.”

“Is there a room number or something?”

“Sorry, no, I gotta stay and keep bar here. Can’t have those ruffians drinking all my sujamma without paying for it!”

Steen followed the directions to the best of her recollection. The inn was HUGE, and all the rooms looked totally identical.

“Well, I’m pretty sure this is the right room. Besides, I don’t think anybody would care if it isn’t, none of these rooms are being used.”

She put down her pack and put on her pajamas. She could feel her eyelids growing heavier at the promise of a nice, soft bed. So soon! She pulled back the covers, and started to crawl into the bed.

“YOUR CRIME HAS BEEN REPORTED!” shouted a guard from somewhere down the hall.

“Huh, I wonder who they’re arresting, I didn’t see anybody else down here”

Suddenly, Steen saw two guards bolting toward her at break-neck speed. They grabbed her and pulled her out of the bed before she could even close her eyes.

“You filthy fetcher! You didn’t pay for this bed! YOUR bed is over there!” the guard gestured at the room next door.

“Well, I think you can see how somebody could make this mistake…” Steen explained, kind of thinking the whole thing was a prank.

“All I see is a mouthy little outlander who thinks she can come to Morrowind without bothering to learn the local customs, and just be a hooligan all day!”

“OK look, I’m cooperating, alright? Can I just send a message to Master Aryon? I’m supposed to be gathering ingredients for some experiment of his, and if I’m going to jail he should know about it, so he can plan the experiment around that or something.”

“Holy shit, that dude is loaded!”

“Can I just send my message…”

“Sit over there, and keep quiet!”

The guards huddled together and spoke in low voices.

“She said she’s running some errand for an experiment, right? Well, if we lock her up and she gets delayed, probably all of Aryon’s… frog tongues or whatever will spoil, and his experiment will be delayed! When he finds out it was all because we arrested his protege, he’ll take it out on us!”

“OK, new plan. Instead of taking her to the clink, we bring to Aryon’s place, and try to ransom her off for some of that sweet, sweet Telvanni gold.”

“Yea, we’d be doing him a favor! But… what if he decides he’d rather blast us into Oblivion than pay up?”

“OK, if it looks like he’s going to blow us up or whatever, then we tell him that we just wanted to escort her home safely, and we’re letting her off with a warning.”

The guards turned back to Steen and raised their voices for her to hear, “Get up Outlander, you’re coming with us!”

Doc and I were up in Seattle this weekend. He was judging a yo-yo competition, whilst I was wandering around looking at things and exploring. And eating brunch. I ate a lot of brunch.

It was fun exploring the city, but by far the best thing I got out of this trip (aside from seeing friends, of course) was a book. I had forgotten to bring a book to read on the flight, and I had forgotten my headphones so I couldn’t even listen to an audio book. So, literally the first thing I did after arriving in Seattle (after looking at all the flowers and things at Pike Place) was visit a cool little bookshop.

Right away, Omon Ra caught my eye. It depicted what appeared to be the Ancient Egyptian god Ra, wearing a space suit. It is no secret that I have long been obsessed with Ancient Egypt: its culture, its way of life, its religion, its architecture, its writing, etc. And, he was wearing a space suit. Come on. I read the back, and it didn’t mention Egypt or Ra or gods, but it described a dark absurdist comedy about a young boy in Soviet Russia that dreams of being a cosmonaut.

I read the first couple of pages, and I was immediately drawn in by its easy, whimsically poetic style. Not at all in the way that some poetic literature can be dense and difficult to parse, this read incredibly well.

After seeing how quickly I fell into Pelevin’s writing, I bought the book and read it pretty quickly. It was an amazing book, and not what I was expecting (although I wasn’t exactly sure what I was expecting). I’m always on the hunt for more good books, and buying them randomly rarely works out. I end up with lots of duds that way (that I read anyway because I paid for them, damn it!), and usually I can only find good books via recommendation.

So: thanks Seattle, for getting me to get this book!

Also, it turns out that it was not a coincidence that the title of the book has “Ra” in it, and the cover depicts what appears to be Ra wearing a space suit. So that made me happy, too.

But it is a coincidence that a blog post with “Set” in the title ended up talking about Ra (Set’s brother) so much. I set out just to talk about my trip in Seattle, and did not plan on talking about the book at all. I named it “Set in Seattle” as an inside-joke that my friends and I shared about the Ancient Egyptian god Set living in Seattle, and he starred in a sitcom called “Set in Seattle,” which was an intentional pun on the fact that the show was set in Seattle about Set in Seattle. OK, I’m not sure where I’m going with this anymore. You had to have been there.